Dolly Gurung led a team of environmentalist and public spirited people that launched what she called a ‘small step’ on Tuesday towards creating awareness at home and expressing solidarity with the worldwide concern about Global warming as a direct fall out of the climate change.

She, on behalf of ‘Explore Himalaya’, an organization dedicated to environmental conservation ‘Sky dived’ from 23,000 ft height of the Mt. Everest, ostensibly to ‘raise awareness amongst the younger generation on Climate Change Conference being held in Egypt . I have taken this small step on my part to sky dive from Everest,” Gurung said on behalf of the initiative. 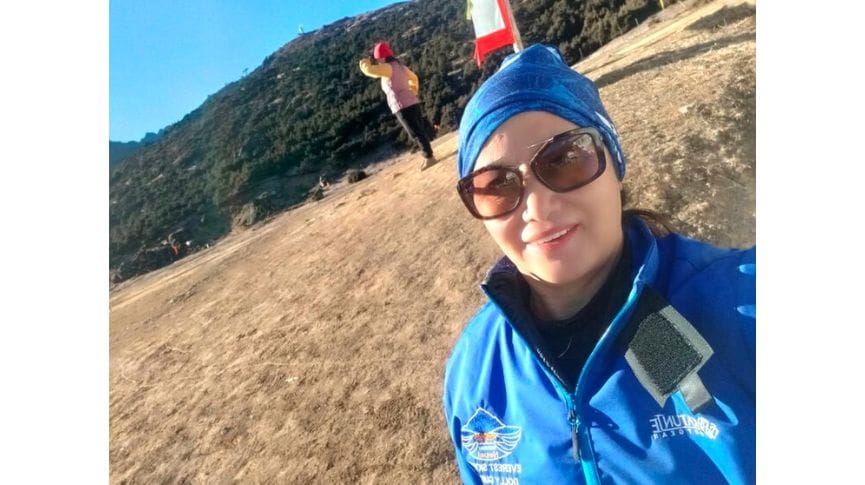 The planet we live in is undergoing tremendous climate change. And, global warming is one of the major concern, if no immediate steps are taken to address the issues at hand, UNESCO climate report states that by 2050 AD half of the glaciers around the world is going to melt down. Imagine the adverse consequences that’s going to affect the population around the world and our future generations. The impact, not to state, is going to be more disastrous than caused by world war I and II. Immediate actions are need of the hour to preserve our planet.  She said, the Mount Everest and Everest National Park listed as the World Heritage sites would have no better fate if the problem is not countered and the climate change issue not addressed.

Gurung also thanked  the Tourism Board Nepal, The Machhapuchhre Bank, High Spirits, Explore Himalaya, Kailash Helicopter Services, her family members and friends for their moral and financial support in the campaign.